This is the "ideas in progress" section that built up on the main page. I've shifted it here, because it's more discussion than result. Somewhat reorganized.

Feel free to keep adding ideas! I will update the main page as they solidify.

(Note that while there will be known people in the room at all times, there will also be an inevitable chaos factor. Don't bring anything if you're not willing to let strangers handle it behind your back for three days.)

Note that the room comes with an HDTV which *probably* allows laptop input. (Late update: it didn't. --Z)

(I am going to bring a bag of wires and adapters to and from various formats, so that hopefully we can get anything to work that ought to work. --jrw)

Record the panel discussion of "Storytelling in the world of interactive fiction" and put it up on an appropriate website as a downloadable audio (not video) podcast. (Many people, believe it or not, don't like to listen to or watch anything lengthy at a computer but prefer a portable player. And what would video add of any real value to audio? - HK) (The PAX events person has offered to video-record some of the PAX panels, including ours. Once the file exists we can worry about converting it to audio or whatever. --Z)

Photos of the room? I assume many people will show up with cameras. I'd like to collect event photos afterwards for a web gallery. Or maybe this just means agreeing on a flickr tag. --Z

(I've done some professional photography, and was planning to have my camera with me. I'm volunteering to get some photos for Jimmy's SPAG newsletter already, I'd be happy to Creative-Commons them and put them up on flickr as well. I agree we should have a shared flickr tag. -- BenCS)

Another idea: at many 'unconferences' I've been to (a la foo camp), there's a great custom of taking polaroid photos of the participants when they first arrive. (We usually just use a DSLR and print from a portable photo-printer.) We then put the photos up on a wall with a notecard under each: Name, Interests, etc. It becomes a *really* useful gallery. While people will have nametags already, it's a whole different story when you can look at the gallery for someone's name, lookup a face, then go seek the face. Or if you forgot someone's name, do a face-to-name lookup on the wall. I guess I'm saying that I'd be happy to volunteer to make such a thing happen, provided a Cambridge native can find us a photo printer.  :-) -BenCS

We will be having some scheduled discussions beyond the official PAX panel.

Panel ideas that didn't make it:

Re the feelie idea: I looked at geocoin sites -- thinking about a fancy zorkmid coin -- there are some great products available but they're expensive, $2 to $4 each. I'd want to have at least 200 for the weekend, so under a buck would be preferable. Wooden coins? Acrylic? --Z

(The coin falls somewhere between art and manufacturing. I have a a couple of designer friends who might know where to point me - let me see if I can get a bead on an affordable source during the upcoming week of 2/1. --HK)

(Oh! In fact, I created the zorkmid design because Jota wanted to make zorkmid geocoins. Hmm. I guess I should send that to you. --jrw)

(I think jrw just answered a question I was going to post - I will assume that if I can find an affordable way to have the coins produced, we can supply the graphics for both sides. Are we talking true geocoins or just souvenir coins? I thought the latter, but if we're looking for authentic geocoins it's unlikely I can help. If the former, what size souvenir coins? Please advise. -- HK) (Whatever size is economical. --Z)

Instead of geocoins or anything using a zorkmid design, a People's Republic of Interactive Fiction Passport. This would be some sort of stiff paper folded in half to make a booklet, with appropriate graphics on the front, a "map" of the People's Republic on the back (use your imagination!), and the How to Play IF cheatsheet lettered inside. Makes both a nice souvenir and a useful tool to help novices play a first IF (with guidance from one of us) in the IF suite.-- HK

Forget the map on the back. It adds nothing, makes work for a graphic artist, and it's too cute. I still like the Passport cover, the cheatsheet inside, but I favor jrw's Beginner's Guide to IF illustration on the back, maybe with some color if and only if the Graphics Squad think it would look better and if anyone has the time. Then I think all three elements tell the same story and would make not only a nice but also a useful feelie. --HK

(I still think this is a nice idea, but I don't know if I or anyone have the resources to make enough. Maybe a less medium-centric solution might be better, like a USB key chained to a table, or a wireless network with a shared folder containing the disk image? --AAR)

(AAR may be right. If we were to produce CDs, though, what would be the minimum number we would want to have for giveaways? - HK) (Same question applies to coins. All guessing is ass-wise. 100? 250? Extras can be used at future events, so they won't be wasted, but it's still down to how much money is available. --Z)

Okay, here's the bits of artwork I have around, for my use or possibly others. (jrw)

The one that needs feedback before I run with it is the IF badge sticker, a prompt-and-cursor logo. It looks like it might be 1" wide by .5" high. It could easily be bigger (and in fact is easier on the printers I've looked at -- I may have to cut them by hand to make them small), but I don't think the badges are big enough to take a two-inch-wide sticker. Here's a large version and an approximate actual-size (as converted to web resolution): 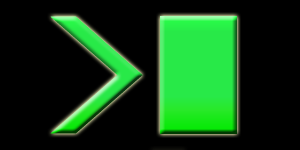 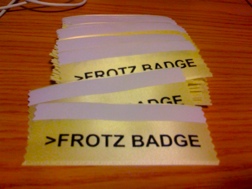 Other art for use 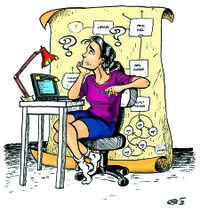 beginners_guide_color_version
Update: I've uploaded a color version I had archived, in case it's useful.
Retrieved from "http://www.ifwiki.org/index.php?title=Talk:PAX_East_2010&oldid=50910"