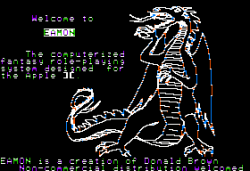 Eamon is a gaming system developed for the Apple II family of computers by Donald Brown. It is considerably more combat-heavy than many contemporary text-adventure systems: the core functionality had hardly any support for puzzles, but incorporated several of the attributes of contemporary role-playing games, including three statistics (hardiness, agility, and charisma), weapon proficiencies in five categories (axe, bow, club, spear, and sword), and knowledge of four spells (blast, heal, speed, and power). While its parser was primitive even by the standards of the times, individual Eamon quests were free to extend the basic functionality of the Eamon system and often did.

Eamon was notable in that the player-character developed from adventure to adventure, instead of, as was and is the norm, having a different and new player-character for each game. This aspect of Eamon is derived most likely from its RPG roots.

The Eamon series features over 250 separate adventures written by a variety of authors.