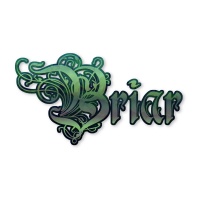 Briar is a short AIF game written by Hanon Ondricek in Inform over two weekends and submitted to the 2013 AIF Minicomp.

Briar is an exploration of one of the more adult versions of the classic Sleeping Beauty tale in which the invading prince has his way with the sleeping maiden several times without waking her up. The story has several different outcomes depending on the player's actions and how, whether, and when the Princess wakes. An elaborate non-interactive finale (necessitated by time constraints and contest rules) that changes slightly based on player action is possible in which the vain intruding prince receives payback in kind for how he treats the Princess.

You never believed the rumors were true.

However it happened, here you are in front of what must be the location in the bard's song…How did it go?

go past the stump / beyond some trees and something something / nearby the bees… You'd swear he said bees.

Anyway, your horse is not one bit happy to be here, having been skittish ever since you passed that menacingly humming beehive. You know how to handle fillies, though, and are able to get her calmed down with an apple and secure her reins to a stump so you can more closely regard the entryway.

Vines the thickness of a man's arm have tangled over a gate, lifting it askew off the hinges before hardening steadfast over a century into tough winding trunks serpentining through the bars which have become a part of the growth.

Peering deep into the canopied thorny tunnel leading back from the gate, you can you can see a strangled hill on the other side of a dry pond. The hill is not a hill, you realize, as you notice regular depressions in the greenery which are overgrown rectangular windows. Yes, that is definitely an overgrown castle.

a castle hiding / like a hill true beauty rests there / ever still.

It shouldn't take too long to hack your way in there. Good thing you brought a sword.