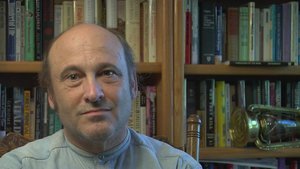 Referred to as the "Dean of Computer Game Design", Chris Crawford is a games industry veteran, developer, and theorist. His body of work ranges from early work with Atari and Avalon Hill software and continues through a variety of other publishers. In 1987, he founded what became known as the Game Developers' Conference (GDC), an industry convention for designers and publishers of computer games. Besides writing an early and often-cited book on the process of designing games (The Art of Computer Game Design), he has written many essays, articles and presentations about the theory of games and interactive storytelling.

Crawford's interviews and writings are punctuated with a general disdain for the direction and priorities of the computer games industry, and the general state of interactive fiction and storytelling through computers. His criticisms include the predictability of story, the programmed consistency of game characters and puzzles, and the lack of quality in simulating or providing storytelling experiences. His masterwork computer project, called Erasmatazz, has been many years in the making (well over a decade), and his firm, Storytron, is intended to sell products derived from it.

Note: These are not interactive fiction games.