This article does not refer to any USB drive containing IF promotional material, information, or games intended for beginners. Rather, it refers to a USB drive supposedly found in the IF suite at PAX East 2010, the files on this drive, or the puzzle involving it. The name PAX USB Drive was arbitrarily chosen by the ifMUD user Jaybird when he created the ifMUD channel on which people discuss solving the puzzle.

On April 1, 2010, somebody uploaded the contents of a USB drive which had supposedly been left in the IF suite at PAX East 2010. This turned out to be a series of puzzles which, as of April 4, are not completely solved. 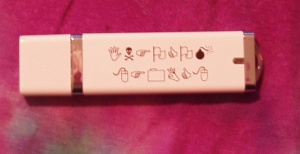 The mysterious USB drive, as pictured in the file "usb.jpg".

Shortly after six o'clock Eastern time on the evening of April 1, 2010, a guest logged on to ifMUD. People log on as guests if they don't have an account, have forgotten or lost their username or password, or for any number of other reasons. This guest, however, had a different agenda. Following is a very brief log of the important things this guest said. This log has been edited down to include only the essentials for privacy reasons.

Guest1 says, "I unpacked my bag yesterday and I think someone lost their usb drive because I found it in there"

Ellison says, "huh! maybe it was one of the SpeedIF usb things going around"

Guest1 says, "I took a picture of the usb drive, it looks dangerous"

Guest1 says, "And here are the files too, sorry to trouble you"

Guest1 says, "http://www.sendspace.com/file/66r5nn has everything, hope it gets back to its owner"

Guest1 says, "Oops got to go. Talk to you later"

(Wiki notes also say: Some very strange guests showed up on ifMUD on April 1. One talked about someone at PAX East 2010 with green hair, and the guest who posted this USB drive to Sendspace said he/she was the person with brown hair.)

Four other USB drives with identical markings were found throughout the IF suite during the weekend. During the final cleanup of the suite, these drives were collected. For two weeks they gathered dust on the desk of a Harvard University staff member before the contents were opened and investigated. They were uploaded on April 15, 2010.

After the 2011 PAX East IF gathering, on March 17, this twitter message appeared:

At this point Jason McIntosh remembered that he'd found such a drive during cleanup on Sunday.

The contents of all the USB drives are now available on the People's Republic of Interactive Fiction web site.

Each of the USB drives contains a bmp screenshot of a game, a "welcome.txt" with reference to @babyjarson, a Twitter screen name, two password-protected RAR archives, and two .par2 RAR parity files, which are used to reconstruct a corrupt RAR archive. With the exception of the two parity files, the contents of the drives are all identical.

Links to compressed versions of the USB files are included below, as is a list of all the contents found within each of the six drives. The drives were arbitrarily designated as "USB_XX" where "XX" corresponds to the volume number of the drive's parity files. The "original" drive (the drive mentioned by the mysterious guest on ifMUD) is "USB_01". The other five drives were found in the IF hospitality suite.

The welcome.txt file on the drive contained this text:

Within minutes of the initial announcement of the USB drive, people on ifMUD had cracked the two password-protected RAR archives.

The following description has spoilers for the solution methods and rewards.

schep noticed that the picture of the USB drive itself had thirteen Wingdings characters. These characters translate to "INFOCOM" and six other characters. The six other characters, "8F0BC8", are the password for the first RAR archive. Then, ScottG remarked that the screenshot contained in the BMP, accessible without a password, was from a game called "Todd's Adventures in Slime World." As it turns out, the characters that make up the password for the first RAR are the final cheat code for the normal mode of that game.

Cracking the first file, level1.rar, yields a second BMP image with a clue to the password for the second archive. The "new game" is a musical version of Zork I. Shortly after the game begins, a sharply-dressed man appears and taps you on the shoulder. This turns out to be Rick Astley, and a few turns later, he begins dancing and singing "Never Gonna Give You Up." When he's finished, he dances off into the sunset, and the game ends. This game is a Z-Code version 3 game, with a release number of 104, and a serial number of 880401.

The BMP image in the first RAR archive was a screenshot of the same game as before. Gunther noticed the presence of a timer in this screenshot, and noted that only one mode of this game, "suspense mode," has a time limit. People then attempted to open the second RAR with the cheat codes from suspense mode. inky succeeded after trying the first code, "DD0114".

The second game is a "Top Gun" adaptation of Seastalker. The word "adaptation" is used loosely here. The game has all people and location names changed, but play is, for the most part, identical to Seastalker. It does not start the way Seastalker normally starts, asking for the player's name. Instead, the game starts immediately. It also has a twenty-four-turn time limit, and some very strange bugs. It is a Z3, with release 104, serial number 870401.

Using the parity files found across the five drives, the third password-protected RAR archive was reconstructed. The password for this file was cracked using the same information gleaned from the first two archives.

The third game appears to be an adaptation of James Cameron's film The Abyss. This was a game that was being authored by Bob Bates at Infocom when the company was shut down. It is a Z6, with release 1, serial number 890320. At this time, there is no verification that this game has any relation to the original Infocom project.

The level4 .par2 files are a format are used to reconstruct a corrupt RAR archive. The original five drives were not enough to reconstruct the archive, however.

On August 3, 2010, zarf was sent the contents of drive 2. This added enough information to reconstruct the fourth RAR archive, which contains ZIL source code for Mini-Zork.

The welcome.txt file contained this message:

The snap00.bmp file is identical to the Slime World snapshot from 2010.

The level1.rar file responded to the "8F0BC8" password. It contained a new image file with two screenshots (Slime World and Chip's Challenge), plus a second RAR archive.

The Chip's Challenge screenshot showed level 9 of that game (no doubt an incidental IF reference). The cheat code for level 9 is "KCRE". A brute-force search through the Slime World codes (the first one on each level) determined that the password was "D9E275KCRE". (D9E275 is the first password in Logic mode.)

The level2.rar file contains an MP3 audio file and a third RAR archive.

genericgeekgirl was able to view the distorted audio with a spectrogram analyzer, and transcribed four texts and two images:

The final line is a quote from an episode of MacGyver, in which it is an acrostic clue for "MURDOC". This is the password for the third archive. The archive contains a fourth RAR archive, a collection of ZIL documentation and code, and this message:

If we accept this at face value, this is the end of this year's puzzle, and level4.rar cannot be opened at this time.

Little is known at this time. So far, all attempts to guess or brute force the password for level4.rar have met with failure. In response, Babyjarson posted to Twitter that the password consists of thirty-two characters, uppercase, lowercase, digits and symbols, and is totally random. If this is accepted as valid information, brute force is the only attack method which will work, and by the time a brute force attack succeeded, everybody who cared about the contents would be long dead anyway.

On April 1st, the modification date of the level3 rar from the 2011 USB stick, BabyJarson tweeted, "uggcovgyls1Ulaa" followed by "sorry that was rotten :///" and "13 hrs left = plenty of time to get down today! uggc ://." The latter two tweets were hints that the first was encoded in rot13. Decoded, it comes out to "httpbitlyf1Hynn" which, of course, is a URL. That points to a sendspace page with a download for a "message.z5" file. It's a quick little "game"; its winning text gives another sendspace URL, this time leading to a mp3 that has another spectroscope message inside it:

This is a simple substitution cipher and translates to:

Translated to ASCII this is:

and ROT-13 decoded this is: