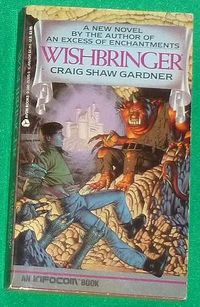 Wishbringer is a fantasy and comedy novel written by Craig Shaw Gardner. It is one of the books in the Infocom series written for Avon Books. It is copyright © 1988 by Byron Preiss Visual Publications, Inc.

The novel is inspired by the Wishbringer game by Infocom of 1985, although with a different protagonist than the game.

Part One: "The Beginning"

Epilogue: Including another false ending or two