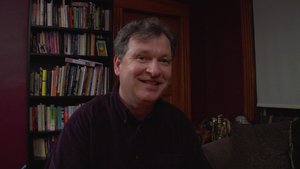 Original one of the editors of the Atari magazine ANALOG in the early 1980s (where he contributed adventure games for publishing in the issues of the magazine), Brian Moriarty played some early Infocom games and resolved to join the company. Getting a job as a play-tester, he soon had the opportunity to author a title in Infocom's fantasy line, which became Wishbringer. This was followed by the ambitious and well-regarded title Trinity, which combined historical reality regarding the history of nuclear science with fantasy. His nickname at Infocom was "Professor".

Following his time at Infocom, Moriarty wrote the oft-cited gaming classic Loom for Lucasfilm Games, and has continued to work in the games industry since.