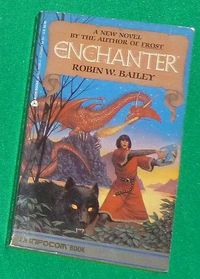 Enchanter is a fantasy novel written by Robin W. Bailey. It is one of the books in the Infocom series written for Avon Books. It is copyright © 1989 by Byron Preiss Visual Publications, Inc.

The novel is inspired by the Enchanter game by Infocom of 1983, although it is clear that the novel has a different protagonist than the game, and that events in the novel take place somewhat afterwards.

Anesi, a young but talented wizard, must defeat the Great Terror before its evil destroys all of Frobozz.