An infotater is a device that gives its user information when it rotates. 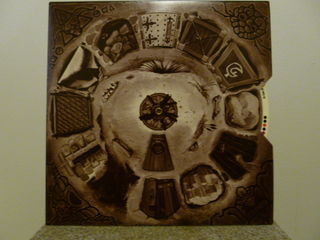 The infotater was a feelie included in the original packaging for the game Sorcerer (Steve Meretzky; publisher: Infocom; 1984; Z-code). It was made from heavy paper stock: a large square envelope open on one side, and a circular disc (the "data wheel") inside with its center affixed to the envelope's front side with a grommet. The open side of the envelope was notched slightly so that the outer rim of the disc was both visible and accessible. The user was expected to hold the envelope in their left hand, with the exposed edge of the disc to the right so it could be easily turned with a fingertip of the right hand.

The front side of the infotater depicted in various shades of sepia a circular stone room, as seen from above, with twelve completely different doors tightly packed around the walls. The four corners of the envelope depict line drawings of strange beings, possibly gods. In the center of the room (around the grommet) is a circular something bound with rope. South of the center is a trap door with a heavy ring, and scattered elsewhere in the otherwise empty room are bones, weeds, and a hole that might be a pit.

The door at the topmost edge and the trapdoor were cut on three sides so they could be opened to view selected parts of the paper disc underneath. Under the upper door would be full color artwork of one of twelve creatures; under the trap door was a brief description of that creature in very tiny print; on the right edge was the creature's name and a color code (five circles of different colors).

The back of the infotater was a solid dark brown with no printing or design.

The purpose of the infotater was twofold. First, it acted as copy protection, particularly by associating creatures with arbitrary color codes. Secondly, it provided interesting and sometimes useful information about the creatures themselves, several of which would appear in the game.

The infotater was only included in Sorcerer's original packaging, which was somewhat larger in width and height than the standard "gray stripe" boxes that were used later for packaging Infocom's games. A later edition released in the standard packaging replaced the infotater with a "Field Guide to the Creatures of Frobozz" brochure that contained the same information.

The relevant pdf file on the Classic Text Adventure Masterpieces of Infocom CD simply reprinted the creature text in six columns on two pages labelled "Infotater", and only black and white scans of the artwork above each column.

An infotater can be found very early within the Sorcerer game. It is described thus:

Infotaters appear in both of the Infocom novels by Robin W. Bailey: Enchanter and The Lost City of Zork, but are somewhat different from the Sorcerer feelie. The novels' infotaters are magical devices that look like pinwheels, and they shine multicolored light when they spin. An infotater is only owned by a wizard, and is activated by its owner blowing on it. The wizard can then ask the infotater questions; if the answer is somewhere in the wizard's guild's library, the infotater will verbally respond with the answer. The wizard can also tell the infotater new information, which it will remember for later.

An infotater will only work for its owner. If someone else tries to use a wizard's infotater, it just acts like an ordinary pinwheel.