You are an Enchanter, that is, a magic user, carrying your spell book, a silver coin, and a magic burin. You don't quite remember how you arrived outside this ramshackle hut, but you think it has something to do with your colleague Helistar, another Enchanter who was investigating some dark magic and hasn't been seen lately. You're rather vague on the details. Perhaps you should explore and see what you can discover.

Note: Releases 1 to 3 were written in Inform 5. Release 4 was the first version in Inform 6.

This version uses the Adaptive Hints library by Mike Phillips as an example of its use. It requires Inform 5.5, library 5/12 or later to compile.

Additional files specific to this version:

More info about this version is wanted, particularly a download link. 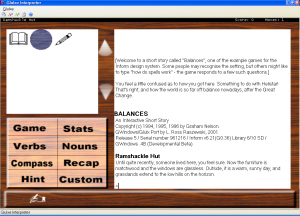 Screenshot of the beginning of the game using Windows Glulxe.

This version has "GUI enhancements". Inventory items are displayed on the left (initially, these are the spell book, silver coin, and magic burin). Along the bottom are the spells that you currently have memorised (the writing hand icon is the GNUSTO spell). Clicking any of these icons will insert the name of that item into the current command.