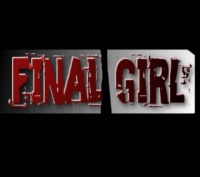 Final Girl is a choice-based web browser game created by Hanon Ondricek. It was written using Failbetter Games's StoryNexus engine, which is offered as the public version of the tools largely used to create FailBetter's long-running web game Fallen London.

The game's central conceit is that the player is the surviving female character who has made it to the denouement of a fairly run-of-the-mill slasher flick horror movie, during which every other character has been murdered or disappeared. The local Sheriff questions the protagonist about her version of events, and she is unable to specify the ultimate fates of ten of the original dozen characters who arrived at the lake. The movie then throws a standard twist: the defeated killer is actually still alive, and the plot proceeds through an extended finale that comprises the bulk of gameplay. The player attempts to discover the locations of the rest of the movie's cast, battle the Skull Lake Stalker as he or she relentlessly pursues the final girl, and get to the end the movie by either dying, figuring out the killer's identity by process of elimination, or gaining enough power (a statistic called BadAssery) and a weapon to kill the Skull Lake Stalker outright herself.

There were twelve of you when you started the weekend, now you're down to three.

There is just you, Bailey, and her boyfriend Max. But you can't think of that. You can't breathe. You're running out of air as you run southward on the eastern trail around the lake.

StoryNexus games are web-based, and are capable of being instantly updated in real time. FailBetter encourages authors to create worlds that can be infinitely expanded, updated, and added to, even as players experience them, in a similar manner that Fallen London is continuously expanded. Final Girl received numerous updates, corrections, and gameplay additions during IFComp as reviewers found errors and suggested improvements, and could receive more as time goes on. The game as it stands is intended as a cohesive, short experience and, other than minor adjustments, would likely not receive any large updates which would create extended additional plot or gameplay.