A compass rose is a figure that displays the points of a compass in a circular arrangement.

In real life, a compass rose can be quite detailed, showing 32 or more points of the compass, both magnetic and true north (and corresponding other directions), and labelled with both abbreviations and degree values.

In IF, the compass rose is simplified to only the 8 compass directions in common usage: the four cardinal directions (north, south, east, and west) and the four diagonal directions (northeast, northwest, southeast, and southwest). Since many works of IF also use the directions up, down, in, and out, these additional four directions tend to be incorporated in one way or another near the rose as part of a larger figure.

Compass roses in IF may be:

On the Z-machine, some games use ASCII art in a three-row tall status bar to represent the compass rose. Normally, capitalized abbreviations for the directions are used to show a valid direction of travel from the current location, arranged around some neutral character that doesn't change. When a part of the rose is left blank, that usually means that travel in the corresponding direction is not possible.

The directions up and down, if in the game, are represented by positions on one side of the rose with either a "U" or "Up" placed above a "D" or "Down".

For some reason, TADS games don't seem to do compass roses quite so often, although they have a couple extra tricks to add to the mix: links and variable font size: 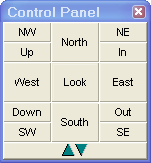 The ADRIFT game author has very limited control over the ADRIFT status bar and cannot, for example, change it enough to offer ASCII art compass roses the way the Z-machine game author can.

However, the ADRIFT author doesn't have to code something like that. The ADRIFT Runner has a standard feature called the Control Panel which features an array of navigation buttons arranged like a compass rose. The Control Panel is available from the Options menu, or just by pressing the F1 key.

The most common alternative to a compass rose is a simple list of valid directions. A rather unsubtle version of this idea is in ASCII and the Argonauts (J. Robinson Wheeler; 2003; Z-code), done in a style that mimics the older games by Scott Adams. Here is the opening location text:

I'M IN A MARKETPLACE IN ANCIENT GREECE

A more elegant version of an exits list is offered by TADS 3. Here's an example from an early location in All Hope Abandon (Eric Eve; 2005; TADS 3):

Each of the offered directions is clickable with a mouse and associated with the appropriate command to move the PC in that direction. An advantage with lists is that the author also has the option of appending extra information to the choice, e.g.: "north (back to Kitchen)".

One could also offer a graphical list. This isn't commonplace, but it was tried with A Sugared Pill (Colin Borland; 2005; TADS 2). Here's what the icons looked like in the opening location:

The icons changed color from grayish to purple when that option became available. This arrangement also allowed the introduction of new icons for specialized travel, such as a steering wheel icon when driving a car.