PAX East is an annual convention, this year running from March 11 to 13, put on by the team at Penny Arcade. You should go. Last year rocked.

Just like last year, we will have an IF Hospitality Suite (Room 846 in the Westin). This will be open noon-midnight on Friday, noon-midnight Saturday, and noon-3pm Sunday.

In addition, we will have an IF function room (also in the Westin) on Saturday only. (See Dave's notes below.) We'll schedule our larger events there.

Both rooms will be open to the public, and will not require a PAX badge.

PAX has confirmed the following two events on their schedule. (These events will require a PAX badge.) Neither is IF-specific, but these are the ones including IF people:

Events hosted by us

(The two PAX panels noted above are early Friday afternoon. IF suite events will be in the afternoon and evening.)

All Saturday events will be in the Alcott room, because that's when we'll have it. 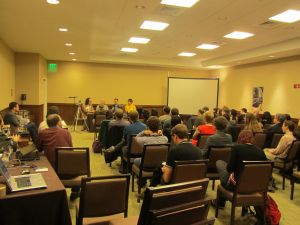 (At 3pm we chase everybody out and start deconstructing the room. Anyone still around for dinner, we'll meet up.)

We have a meeting room reserved at the Westin for Saturday from 12 noon until 12 midnight, connected to the convention. It's 1,035sqft (41ft x 29ft) and seats up to 100 people. We'll have a theatre (rowed seats) layout, plus five six-foot-long tables at the back of the room.

(To get there: cross skywalk to Westin; look right past escalators, mezzanine level)

Individual Wi-Fi codes can be purchased for the day at $50 on Saturday, but they need to be requested early. As the day gets later, they won't provide new codes. There is a slight delay as codes are created. If anyone wants to pre-order Wi-Fi access, let me know.

We cannot bring any of our own food or beverages into the meeting room. There's a union rule that bars outside food. There may be signs in the room saying "No Food or Beverages Allowed". The cost of hotel menu food is prohibitive.

Time yet to be determined: playthrough on a projector of the works submitted to the IF demo fair.

Swag and other supply plans

This is for the IF Suite only. (The Alcott room will be thoroughly inhabited on Saturday, so I don't think we need signups for it.)

We need people in the Suite from noon-midnight Friday, noon-midnight Saturday, noon-3pm Sunday. Two-hour blocks. Yes, this means somebody will have to miss each event in the Alcott room -- sorry about that. I'd prefer to keep the Suite open through Saturday, even though it will probably be low-population. (It will be the quiet room with the snacks.)

You are signing up to stay in the Suite, watch the stuff, and make sure nobody walks off with anything or pours soda on the bed or anything stupid like that.

This is an Excel Googledoc of the current schedule. If you add yourself here, add yourself there for those of us who are 'visual learners.'

If you can help with Sunday cleanup that would be awesome!

Note: Overlap is not a bad thing. Where we don't have it, that's fine too.

IF Fans Who Attended