ifMUD is a perl based mud where many regular and longtime IF community members chat. Although the ifMUD allows for regular mud features, it is mostly used as a chat server. You can sign up for an account at http://ifmud.port4000.com.

ifMUD was founded in 1997, and its original host was Liza Daly (Liza). For several years, John Cater (katre) hosted ifMUD on a server in his basement. In the evening of December 5, 2010, ifMUD moved yet again to Justin de Vesine's (vimes's) virtual basement at http://ifmud.ziz.org.

Notable Locations on the ifMUD 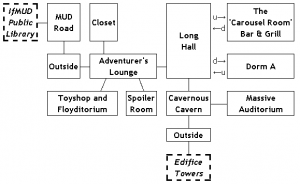 A simple map showing how ifMUD's more notable rooms are connected to each other.

If ifMUD is down for whatever reason, people may log onto ebMUD2, the Emergency Backup Mud 2, at schep.homelinux.net port 4000. Thanks, schep!

ebMUD2 is a completely separate mud with its own playerset and a different geography, though, so users must sign up all over again or use a guest account to use it. The command "connect guest guest" is how to casually log on there.

ebMUD, the Emergency Backup Mud, used to be at ebmud.nitfol.com, port 4000. It was a completely separate mud with its own playerset and a different geography, though, so users had to sign up all over again or use a guest account to use it. The "lounge" command took players to the firepit there. On March 6th, 2008, nitfol.com shut down permanently. Allen, nitfol.com's maintainer said, "Due to misuse by a coworker, I have to disallow access to nitfol to anyone outside the company."

Windows: BeipMU and Potato (the latter also available for Linux and Mac OS X) are both free, lightweight, have "keepalive" settings, and allow replacing text with style changes (especially useful for ClubFloyd play).

Other platforms to be added...

Occasionally, some members of ifMUD will get together and meet in person; this is a "mudmeet". Sometimes short games are created at mudmeets, for example: Pick Up the Phone Booth and Aisle in 2001, the games of Summer Beachmeet 2002 Comp in 2002, and the games of PAX Speed-IF at PAX East 2010.

ifMUD settings or characters have appeared in: