This contains all the "Featured articles" which will appear on the Main Page. The heading number is chosen based on the date of the month. Headings other than 1-31 will be ignored, so old material can remain on this page for potential future re-use. The page can only be edited by administrators since its contents appear on the Main Page, but if you have suggestions then please click "Discussion" to edit the talk page.

From the Scots verb grue meaning "to shudder," also the root word of gruesome.

A legendary creature in Infocom games that would inevitably eat a player-character who spent too long in the darkness. [ES]

Browse IFWiki's database of authoring systems, interpreters, and other software, using filters to narrow your results.

Physical items -- brochures, photographs, small coins, glow-in-the-dark plastic stones, and other paraphernalia -- distributed along with IF software, either purely for aesthetic/immersive value, or to serve as a copy-protection mechanism (offering clues to an in-game puzzle). 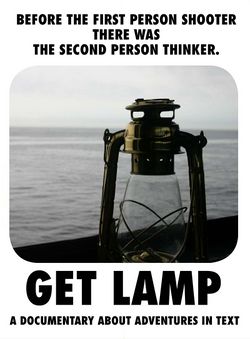 Cover art for GET LAMP.

Get Lamp: The Text Adventure Documentary (http://www.getlamp.com/) is a documentary film project by Jason Scott, filmed between 2006-2008 and released in 2010. Filming started in February of 2006 with an interview of Mike Berlyn, with pre-production research taking place at least a year before that.

(Read more at Get Lamp)

ClubFloyd was founded on September 2, 2007. The idea behind it is that each week at a pre-arranged time, people can meet online to cooperatively play a game of interactive fiction.

Initially, a trademarked name for the hint booklets published by Infocom; now a generic term for a way of organizing a series of increasingly explicit hits that do not unnecessarily destroy the challenge of solving a puzzle.

Each of the Infocom Invisicules books included a series of questions that the player might ask about a particular puzzle (e.g. "How do I find the cave entrance?"), and a series of increasingly specific answers written in invisible ink.

An interpreter (or terp, for short) is an application program ("app") which reads a story file and presents the game contained inside that file to the player.

Parser-choice hybrid (or just hybrid) interactive fiction covers works which are not easily categorised as either parser-based or choice-based IF, having some characteristics of both.

A term invented by Graham Nelson to describe the nature of a player's interaction with a game.

(Read more at Triangle of identities)

Note: The Cheese-friendly Game Directory is a webpage by Emily Short. The content of her directory is used on IFWiki with permission.

A magic word implemented by Will Crowther in the original text adventure, known as "Advent" or "Colossal Cave Adventure", among other names.